Originally written in 2016
Guyana has gorgeous dark skies. So naturally, it would be ideal for star parties. A star party is when a group of people gather to observe the wonders of the universe using a telescope, and have discussions on space and time. Back in May 2016, I got the idea to host a ‘star party’ due to an increasing outpour of interest in observing the night sky from friends and family who kept asking me when I would be available to take my telescope out so they too can experience the wonders of the universe we live in. So I created a Facebook event for June 2016, invited a few friends and family, and eventually my friends began to invite their friends. The feedback was great, and inspiring because my passion has always been sharing the gorgeous night sky with those who haven’t quite experienced it looking through a telescope – bringing the celestial sphere closer to us.

My friend, Mahendra Mahadeo, whom I met through social media because of my hobby, made his own 6″ dobsonian telescope. I reached out to him to help me accommodate the number of people who expressed their interest to come out. Weeks beforehand, I drove around Georgetown seeking an ideal spot to host the star party. I consulted with Mahendra and my wife, and we settled to host the event at the seawall ‘bandstand’ place. The main attractions at the time were the planets, Mars, Saturn and Jupiter. 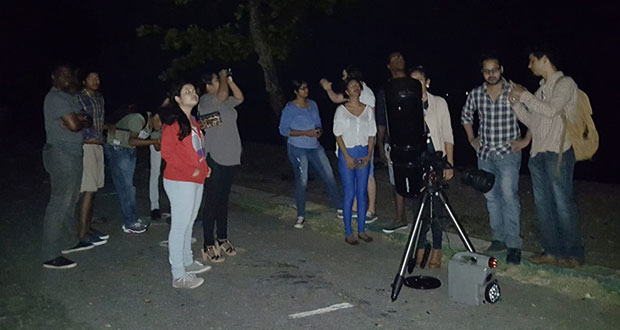 In addition to giving invited guests their first look at the Moon or Saturn through a telescope, we also got requests from random visitors to take a look through our telescopes. Together, we chatted about our mutual curiosity concerning the universe. Mahendra and I were asked a lot of questions about the equipment we were using. Someone asked why were we doing what we do.

We were out for about 4 hours, and people kept calling to come out past 11pm! We already had about 35 people who expressed interest in attending on Facebook that came, and we had a few who simply walked by to say hi and take a peek at the Moon. It was an excellent turn out given that we gave people short notice due to the weather.

As for the reactions of the participants as they took part in the activities, this was perhaps the best part of the entire event. I love seeing people’s expressions and hearing their remarks after viewing the craters on the Moon for the first time with their own eyes, or gazing upon the mysterious but breathtaking view of Saturn’s rings. The most common remark I heard was ‘wow’, followed by ‘this is real after all’. There were some expletives in there as well which I won’t repeat! People are used to seeing close up images of the Moon and planets on TV or as pictures in magazines or on the internet but it’s quite another thing to see it with your own eyes in real time. It sort of turns your experience of the world on its head. This is what motivates myself and Mahendra to look forward to more star parties, and to come up with ways to engage with the public further.